So that’s what Twitter’s for!

I had never been much of a fan of social networks when it comes to keeping in touch with friends / acquaintances / contemporaries: I’m not on Facebook, for example.

Recently, Twitter came to my attention and I gave it a go. At first, I felt that it was a nice way to keep in touch with things, events, news and, as I’ve discovered later, people with similar professional interests. 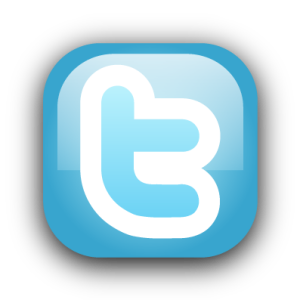 I started off following a few news broadcasters, comedians, institutions and work colleagues. Then I looked up notorious researchers in some of my areas of interest (@henryjenkins, @markwarschauer only to name a couple) and this turned out to be an amazing way to find out about new publications, people and ideas relating to those disciplines. The horizon was expanding.

At this stage I had tweeted very little and was somewhat struggling to position myself vis-à-vis that invisible audience.

Last week I attended the Education in a Changing Environment Conference, Creativity and Engagement in Higher Education in Salford, and I met a hundred-odd technologists, all with seemingly extensive experience of using Twitter. Here’s what I learnt:

What hash tags (#) really do

Before last week, I had never tweeted using hash tags. Only at the ECE conference I realised the purpose of tagging tweets during an event like this one. In the main conference theatre, a ‘tweet wall’ was displaying in real time the delegates thoughts and comments, and many used the conference hash tag to post links, slides and other resources for the benefit of the other participants. This brought incredible strength to the conference’s backchannel and I found it a new and very exciting way to interact with other delegates. Almost every person I spoke to during those three days, I spoke to on Twitter before meeting face to face. This created a remarkable dynamism among conference delegates, whilst allowing people who couldn’t make it to follow the event online.

What’s more, today I am following via Twitter the Personal Learning Environment (PLE) Conference which takes place in Southampton (#ple_sou). The Twitter feed is an excellent addition to the live video feed, allowing to interact with other participants (on site or not) and to ask questions.

What’s really striking about this is not the technical side of it. Online Asynchronous Discussions (OADs) have been around for many years now and what Twitter achieves is in itself no feat. What is astounding is the scale and the speed of it.

At ECE11, Dr Alec Couros gave a wonderful example of crowdsourcing. 30 minutes before his appearance on the panel, the conference organisers provided him with a list of questions submitted by delegates. Within those 30 minutes, Alec created a public document (using Google Docs) including some of the questions he was given and he asked his 13,021 Twitter followers to contribute ideas by collaboratively editing the document. I was able to participate myself, and by the time the panel started, there was more food for thought in that document that could have been discussed during the whole conference. Alec also explained that he had used a similar process to get feedback on his CV when he (successfully) applied for tenure.

Now when I’m at work, I’ll regularly have 2 or 3 Twitter feeds open on my desktop to keep an eye on what’s happening!

Salford’s 6th Education in a Changing Environment Conference, Creativity and Engagement in Higher Education has just come to an end after three amazing days full of presentations, PechuKuchas, intersting chats and encouters and lots of fun!

I’ve only been to a handful of conferences but this is by far the most inspiring, exciting, modern, dynamic one I’ve attended. The amount of creativity demonstrated by the organisers and during the presentations was truly remarkable and sets the bar really high for the next one.

The highlight of the three days was doubtlessly Dr Alec Couros‘ Keynote (slides / video) on “Why Networked Learning Matters“. For an hour and in a truly exciting fashion, Alec advocated “openness and connectedness” in education. He reminded of the importance for educators to position themselves as network mentors, facilitating students’ access to the vast array of open resources available out there. The greatest challenge facing HE students is not finding information, it is making sense out of it.

Alec explored the notion of digital identity, urging  educators to present semi-public selves (Greenhow, Robelia, & Hughes, 2009) in order to connect with students to encourage them to take part in real-life interactions.

He also highlighted some of the benefits of Personal Learning Networks over Content Management Systems (in my institution’s case, Moodle), reproducing a very striking graph by Jon Mott: 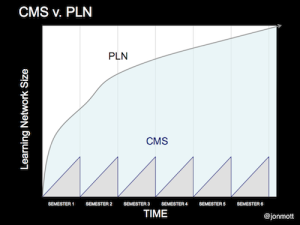 This figure represents the incremental dimension of the PLN size, in strong contrast with the ever-resetting CMS, used by so many educational institutions. This highlights one of the advantages of encouraging students to develop Personal Learning Networks rather than access and produce resources over very short periods of time (terms).

This is of particular interest to me as there has been an ongoing debate in my institution on whether our newly-created Student Portal (a dedicated social networking space for our students, based on Ning) should be open or closed. I believe that the figure above illustrates better than anything else the need to provide students with an open, ongoing, free-access space for working, networking and socialising. As of today, our Ning network is still closed and offers no opportunities for our students to broadcast their content to the outer world and benefit from other people’s views and opinions.

The constraints of privacy and security must be looked at with the greatest attention, but they shouldn’t prevent us from providing our students with an information-rich collaborative learning environment.

Now I need to convince my institution to open up our Ning portal.

Thanks for reading. Check back soon for more on ECE11.

Tomorrow is the first day of the Education in a Changing Environment (ECE) conference at Salford University, UK.

The programme is extremely exciting and promises to offer a number of different perspectives on Higher Education and creativity in teaching and learning.

Also, PechaKuchas (I imagine this is how you spell the plural of PechaKucha) are an entirely new thing to me and I must say I’m quite intrigued by the idea. If you don’t know what a PechaKucha is, this might help.