‘Which operating system is better?’ – it is striking how often this argument comes back in conversation, even when you really don’t want it to. As a life-long Mac user, I’ve long given up trying and explain to people why I use a Mac. I don’t think it’s worth the effort, I’d rather let people use whatever they like and not worry about it.

Over the years though, I’ve used a few different versions of Windows for various reasons. I currently own and run two copies of Microsoft Windows 7 Home Premium 64-bit Edition. I am trying really hard to get accustomed to it, but in the end I must face it: I still don’t like Windows. Here’s one of the reasons why. More to follow on this blog.

On booting a Windows machine, one first faces a gloomy black screen with a good old-fashioned blinking dot (don’t we all miss the eighties!), shortly followed by a low-res, ugly welcome screen informing you that Windows is starting up. To take up Stephen Fry’s analogy of computers as buildings and living environments (at 1’00” in this video), this is a bit like walking into your house every day and be faced with a bare, unpainted wall with old blu-tack marks all over it. Except that in the case of Windows, you can’t repaint that wall. It’s been there since the very first versions of the OS and it is taking inconceivably long for Microsoft’s software architects to replace it with a nice and welcoming startup screen at native resolution.

Regarding the issue of screen resolution, some would argue that the low-res startup screen is a consequence of the fact that Windows runs on third-party hardware, and that graphics drivers must load before the OS can fully exploit the available hardware. I understand that, but I have one problem with it: I don’t care about graphics drivers. What’s more, I don’t think any user should care. People should care about nicely painted walls and welcoming startup screens. I’m sure there is a technical explanation behind every glitch and bug in the system, but after 20 years of the same blinking dot, I think what it really comes down to is Microsoft’s engineers not caring anywhere near enough about the end-user experience.

But it’s not all bad news. There has been some improvement since the not-so-long-gone time when the user was presented with a list of bizarre things that the computer was doing to itself upon start-up:

Fond memories. The iOS version of the excellent indie game World of Goo does a great parody of this: 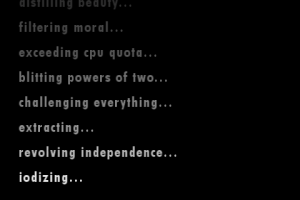 Anyway, I’m getting sidetracked. But you get the point. I still don’t like Windows.