Once in a while when using a device of some kind, you need to learn a new functionality. It was the case for me the other day when Apple updated the iPhone operating system iOS to version 5.1.

Changes brought to the system were mostly minor and required little adaptation, if any, but one of them caught my attention. The button allowing the user to quickly access the phone’s camera from the lock screen had changed slightly.

Firstly, the camera button was now displayed permanently on the lock screen. Beforehand, the user had to double-click on the home button for the camera icon to appear. Secondly, it now presented some horizontal lines above and below it: 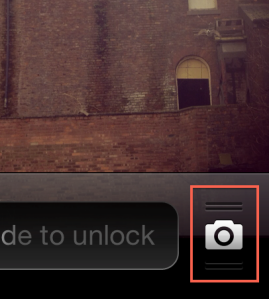 Prior to the changes, you had to tap on the icon to access the camera, but the newly appeared lines now suggested that some change had been brought to the way the button worked.

So I tapped the button to try and access the camera, as I would have done before. This did not open the camera application. Instead, it made the entire screen bounce up and down slightly, briefly revealing the camera app underneath it:

So pressing the button no longer worked, but the device gave you a clue as for what else you might want to try.

What’s truly remarkable about this piece of design is how intuitively the new feature can be learnt. One way to go about it would have been to add to user manual a section on ‘a new and easy way to open your camera app’, but instead, developers simply added that little bounce effect, providing the user with simple but efficient feedback as for how they might modify their behaviour to work the device.

For a few minutes, I marvelled at how ingenious this functionality was (yes, I’m easily impressed). But what’s more, I kept thinking of how such simple an efficient design could be used in my teaching, to help students learn new stuff effortlessly. Not that all learning should be effortless, but there’s nothing wrong with making people’s life easier once in a while.

So now the question is: how can better design help my students learn better? Any thoughts, please share!